For the second Challenge in 2006, 5 different models of vehicle were used - this time though the Defender and the Range Rover were relegated to Support Duties, leaving the Freelander, Discovery 3 (LR3) and Range Rover Sport to the front line.

Number Prepared: 31 (29 used during the main Challenge)
Stages Used by Competitors: None (Support Duties Only)

Notes: The Defenders were essential Logistics vehicles used on every stage performing duties such as Communications, Recce, Film and Photography as well as essential medical backup..

Notes: The Discovery 3's were used in almost every way conceivable - in Stages 1 and 2, 15 vehicles were used for Press and with 2 as permanent workshops, whilst in Stages 3 and 4, 22 vehicles were used as Team, Support, Workshops and Recce Vehicles. A single vehicle appeared in Brazil as part of the 'fan' of cars shown at the edge of the beach. 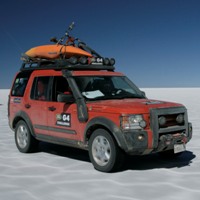 Notes: Although only used by the Competitors on the legendary Copacabana Beach, 4 Freelanders were used by Land Rover Staff in Thailand and Bolivia (2 in each location). Interestingly, all of the actual vehicles 'driven' during the event were Petrol V6 versions, but a single TD4 (Diesel) version was perched on top of a stand outside the beach for the weeks leading up to the event as an advertisement. It is rumoured that this vehicle never even used a full tank of diesel during the whole event!

Number Prepared: 24 (19 used during the main Challenge)
Stages Used by Competitors: None (Support Duties Only)

Notes: For the 2006 Challenge, the Range Rovers were used as Logistics and Backup vehicles - 9 were used in Thailand for various roles including Press, Film and Medical, whilst another 9 were used in Bolivia for similar duties. 1 of the Bolivian vehicles was specially modified to carry the Telecommunications gear (including satellite based Internet connections) allowing both the Land Rover staff and the journalists to contact the 'outside world'. A single Range Rover was also used in Brazil. 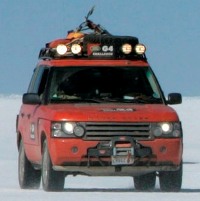 Notes: During the Thailand leg 20 'Sports were used, not only by the Competitors, but also by Team Support staff. Like the Range Rover, a single vehicle appeared in Brazil, with the remaining 13 used by the Press in Bolivia 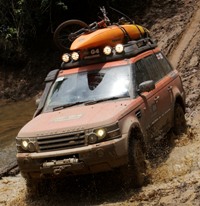